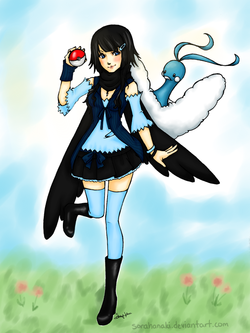 Aria – Altaria (female): first Pokémon she received; she got an egg from Clair and was told to raise it when she was 6 years old. Altaria has been her most trusted Pokémon ever since

Firefly – Flygon (female):  she found a baby Tranpinch and rescued it from deep pit, and ever since as raised it

Cross – Salamance (male): she received a little Bagon from Lance and was told to train it, through pain and tears, this Pokémon gave her a lot of trouble

Storm – Lanturn (female):  was out fishing one stormy day in the city and caught a Chinchou on her fishing hook

Aquamarine – Lapras (female): she found a beached Lapras and rescued it, keeping her on her team; she enjoyed surfing the seas on her Lapras

Beauty – Milotic (female): thought it was the ugliest Pokémon she had ever seen till she feed it a lot of Pokéblocks till it evolved; she uses Milotic in her beauty contests

personality: Sora is a young, smart and opinionated girl. Though she might seem a little stuck up, she is very kind to people and Pokémon alike. She is very careful and does things with caution because she’s quite tactical from learning from the great Dragon tamers themselves: Lance and Clair. With her strong personality, she is willing to brave anything to travel the world to learn about Pokémon.

bio: Sora was born in Blackthorn City. Ever since she was young, she’s always dreamed of being like Lance and Clair. She watched them day and night as they trained or battled trainers. When she mentioned to Clair that she wanted to be a Dragon tamer, Clair gave her egg and told her to raise it. She eventually discovered that it was a Swablu egg when it hatched. From there on, she raised her own team of Dragon and Water Pokémon: Altaria, Flygon, Salamance, Lanturn, Lapras, and Milotic. She traveled the Johto region and ranked 3rd in the Johto League Championship; however, she was unable to defeat Lance when she battled the Elite Four. Returning to Blackthorn City, Sora decided to leave her water Pokémon with her parents as she brought along Seadra, Gible, and Dragonair along for a new adventure to the Kanto region.

hobbies: Battling, training, and occasionally being a Pokémon breeder

relationship with Zane: Sora and Zane are great friends, most of the time they travel together. Sometimes, they are each others' rivals. Sora kind of has a crush on Zane, so she acts pretty silly around him. She likes to tease him quite a lot. For the most part, they can probably be considered "best friends."

*** OUTFIT IDEAS: Please only use this if you really must. Alternative outfits must include her black, wing-like scarf and a hair clip or two. Use similar color theme for the clothes: black (neutrals) and blues.