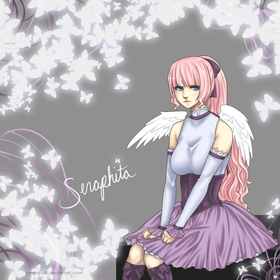 art © me
Name: Seraphita
Nickname(s): Serah, Sera
Age: Immortal, looks to be in her 20s
Gender: Female
Race: Angel
Height: 5' 7"
Weight: 125 lbs
Skin color: Fair
Hair color: Pink/Strawberry blonde
Eye color: Cerulean blue
Occupation: Nurse, shelter volunteer
Physical appearance: Serah either has her hair up in a ponytail or two pigtails, rarely sometimes down. In her human appearance, she hides her wings with her magic, so that humans cannot see them. While being casually around other magical creatures, Serah will have little, white, feather wings. In her true form she has large feather wings.
Hobbies: Helping others, cooking, sewing, reading romance novels, praying, and being with Bael
Personality: Serah is a quiet and shy lady, which she presents herself in. She is very sweet and caring, as an angel of the Lord. She is passive, so she is a bit easy to persuade. Three words to describe Serah: sweet, shy and passive.
Biography:
Lover: Bael'Thas
Relationship with Bael'Thas: It was love at first sight. Serah fell for Bael, hard. Like it has once been said,"opposites attract." Serah dotes on Bael a lot. She is always passionate with Bael, telling him "I love you" a lot, probably more than she needs to. She is a very gushy romantic at heart. Bael and Serah's relationship is forbidden love; however, Bael has been kicked out of Hell and Serah chooses to no longer return to Heaven. She has abandoned her Father, leaving Heaven and everything behind, to be with Bael.
*** OUTFIT IDEAS: Serah usually likes to wear dresses and skirts. She has a very feminine appearance, as in she looks "girly." She prefers to look more semi-casual to smart casual. She likes lace, ribbons and frills. Lolita is a possibility, but since she appears to be 20-ish, please use Classic Lolita or Aristocrat at the most. She does have a big bosom, so she likes to wear clothes that are more stretchy.